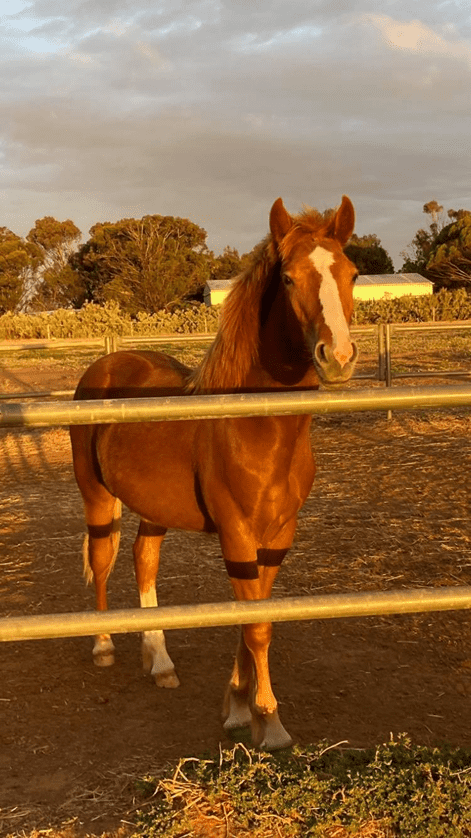 Noddy has joined us at Heartfelt Support, and he has quite the story. Here it is, written by Anita Trenwith, who raised him from a young foal. Photos also by Anita.

The story of SABA Noddy

Kosciuszko brumby mare, previously named “SABA Fleur” and now known as “SABA Star”, was trapped at Cooleman in NSW by National Parks. Star along with 27 other brumbies were rescued that day from slaughter by the South Australian Brumby Association (SABA). They arrived in SA on 5 August 2020,  many of the 16 mares on that truck were already in foal, including Star, and in late 2020 a total of 10 foals were born, including Star’s foal “SABA Noddy” he was born in October.

Noddy was a little chestnut colt and soon won the hearts of visitors at the brumby sanctuary with his curious and bold personality.

Noddy was adopted along with filly SABA Gypsy and moved to Yaratina Farm on 12 May 2021.

Initially Noddy travelled with his mum and once he settled into his new home he was weaned and his mum went back to the sanctuary. She was soon adopted and moved to a lovely home in the Adelaide hills.

Unfortunately SABA Noddy was not your average tough brumby, within ten days of moving to Yaratina Farm he had a visit from the vet to treat his eye for a scratched cornea. Luckily he was easy to halter train making him manageable for the treatment that followed.

Noddy recovered from the scratch only the have his eye flare up again as soon as he stopped medication, and so began an ongoing battle with an autoimmune response that required ongoing steroids.

Coinciding with one of his eye checks on the 8 July 2021 the vet gelded Noddy to ensure we didn’t have any Noddy babies in the future. There were enough brumbies looking for homes without breeding more.

Unlike the tough brumby he is meant to be, by the 16 July he was battling a raging infection and had to start strong antibiotics to save his life.

Finally, his tough brumby instincts kicked in, he recovered from the infection and progressed quickly learning all about farm machinery and quad bikes. He learnt to lead, had his first bath, had children doting on him, brushing and feeding him and learnt to mingle with the other horses at Yaratina Farm.

He met the farrier and learnt to load in the horse float. He was eager to learn and needed a job to keep him out of mischief.

Unfortunately the wind, dust and flies at Yaratina Farm on the Adelaide Plains made it difficult for his eyes to make a full recovery and wean off the steroids, then the opportunity came up to move to the hills. Less wind, less dust and less flies, this would increase his chance of his eyes making a full recovery.

On 22 January 2022 Noddy moved to Chandler’s Hill to start his new life as a therapy pony for Heartfelt Support. SABA Noddy was born for this job, getting brushed and pampered while he helps people with disabilities connect with horses. This Kosciuszko brumby is going to play a major role in improving the lives of many children living with disabilities such as autism. He is showcasing the true versatility of these wild horses and the amazing roles they can fill.

So, that’s the Noddy story so far. We’ll keep you updated on his continuing story here at Heartfelt Support.